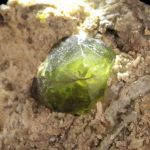 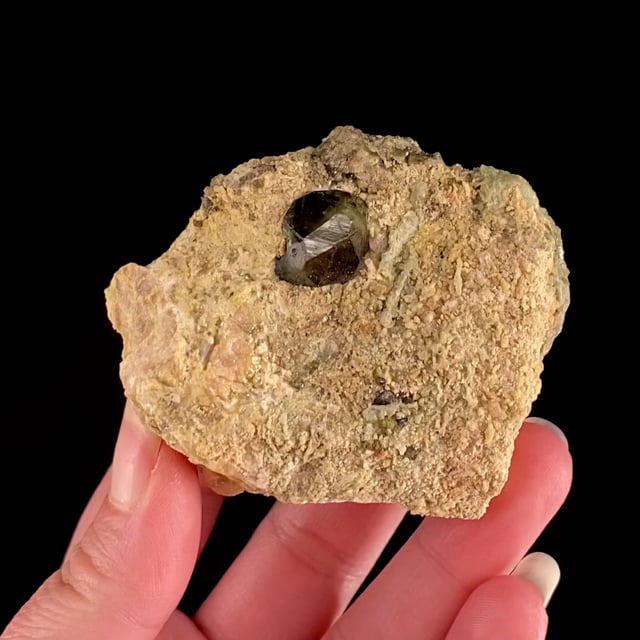 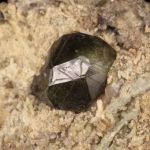 A gorgeous matrix display specimen of the famous Demantoid Garnets from the Tubussis Farm 22 locality in Namibia dating back to the early 2000s. I would say that Demantoid is the most valuable and sought after variety of Garnet in the world, both in terms of crystals and faceted gems. The crystals from this locality are among the best matrix examples of Demantoid from virtually anywhere in the world. It's almost impossible to find matrix specimens from classic localities like Russia, and the only other Demantoids of note in the last 20 years are those from Madagascar, which will never be mined again. This piece is a very aesthetic, fine quality small cabinet piece of these classic Garnet featuring a very sharp, lustrous, rich yellow-green color slightly modified trapezohedral crystal of Demantoid measuring 1.3 cm, smartly sitting atop the underlying matrix. The Garnet crystal is undamaged, and the piece sits beautifully on its own without the aid of a base or clay. Priced at $5,000 in the inventory. This piece comes from the collection of the recently departed Charles ("Charlie") Locke Key (May 18, 1935 - Dec 22, 2021. Charlie was ostensibly the most successful mineral/gem dealer of the second half of the 20th century. He also had the incredibly rare distinction of having two minerals named in his honor (Keyite and Ludlockite), which is quite significant for somebody who wasn't a part of the academic/scientific community. You can read his obituary in the March-April 2022 issue of the Mineralogical Record (https://mineralogicalrecord.com/back_issues/hallelujah-junction/).