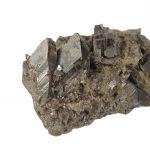 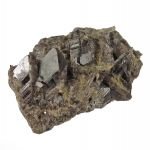 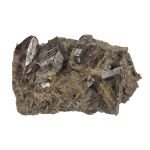 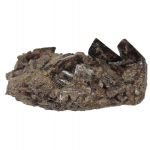 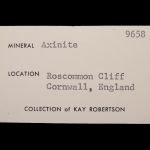 Three parallel-growth, lustrous, gemmy to translucent, clove-brown axinite blades, to 1.7 cm, prominently jut out from the solid axinite matrix from the famous Roscommon Cliff, Cornwall, England. This is a rich and showy axinite miniature from this historic old Cornwall cliff deposit, also known as Stamps and Jowl Zawn. The interior is in good shape. Periphery wear is noted, but it remains a highly representative example for the species and locality. Ex Kay Robertson Collection # 9658 and acquired from Al McGuinness in August, 1982. Kay is a prominent California collector, who specialized in European classics (see the article in the March-April, 2007 Mineralogical Record and the 50+ page article in the German Magazine "Mineralien-Welt" November-December 2017). Classic Cornwall axinite and a rare accessory species from here.