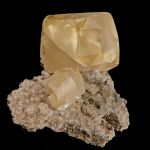 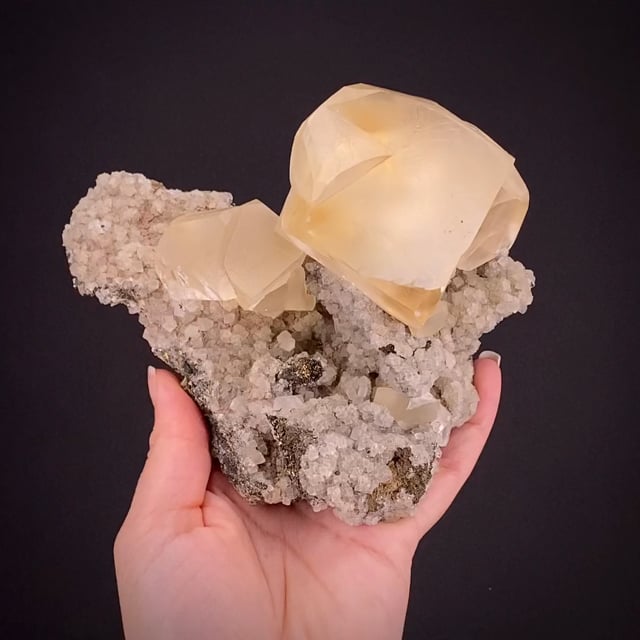 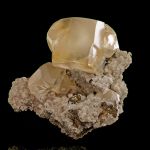 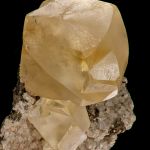 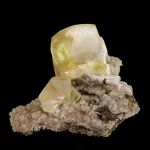 One of the most famous of Kazakh mineral finds ever are these twinned calcites from a famous industrial iron ore mine that was used by the Soviet military in old times. Most specimens were mined in the late 1980s into the late 1990s, and then production of them seemed to stop. While small examples of these sharp interpenetration twins are common enough then and now, this location seldom produced anything large in size as specimens, particularly with big crystals. This large specimen hosts a giant twinned calcite measuring 8.5 x 5.5 x 5 cm in size, perched dramatically atop a knoll of matrix. It is 360 degrees and complete all around! The smaller twin at the base, approximately 4 cm across, has a contact and very minor damage that can be moderated by a good lab cleaning, but is trivial in context. It is, in full, a spectacular example of this material and only comparable to a very few specimens in other major collections that have since sold such as Freilich (Sotheby's 2001) or the Trinchillo Sr Collection (Heritage, 2008) for rather large sums of money by today's standards. This is a significant, rare specimen because of both size of the crystal and the size of the piece, but also its condition. This should be valued in the $10-15,000 range.