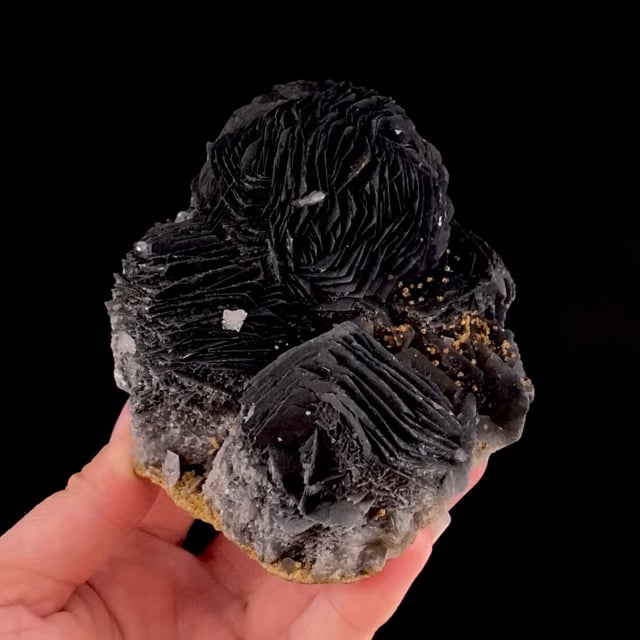 Here we have a fantastic big showy display specimen of these classic and unique Calcites from the Herja Mine in the Carpathian Mountains. When you think of all the different styles / habits / forms for Calcite around the world, you won't find anything quite like these distinctive old classics. This attractive small cabinet sized piece hosts beautiful layered "rosettes" (intergrown flattened rhombohedra) of Calcite with sharp well-formed, faces forming "rosette"-esque groups measuring up to 5.2 cm across, which are colored a rich grey hue from inclusions silvery-grey Boulangerite. Minor Quartz and tan Siderite can be seen scattered on the front of the piece. The attractive "twisted" form of the Calcite crystals is striking. I never tire of seeing these pieces, as they are some of my favorite Calcites from any locality. The unique habit of the Calcites is already intriguing, but the Boulangerite inclusions is just the cherry on top. Boulangerite is a fairly rare sulfosalt, so to see so much of it included inside the Calcite crystals is actually quite impressive, as you rarely encounter the species in large quantities from most locales around the world. I can't find any damage of note, and the piece sits and displays wonderfully on its own. Priced in the inventory at $4,500. From the collection of Kurt Hefendehl, a well-known German collector all over Europe with worldwide contacts to dealers and collectors. He started collecting seriously at the age of 14 and his great and varied worldwide collection reached over 6000 pieces. He was very active mineralogically until shortly before his passing in 2020 at the age of 82. Considering his collection had a large number of pieces, it still had an unusually high standard of quality from most worldwide localities. He particularly specialized in all classics as well as minerals of the Black Forest, where he spent much time collecting. His Black Forest and German subcollections went to his good friend Wolfgang Wendel. We at The Arkenstone have the privilege of offering the remainder of this great worldwide collection over the next two to three years through our various platforms.