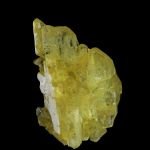 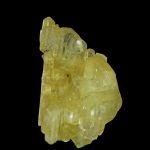 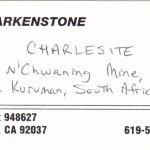 Charlesite is not commonly seen from the famous N'Chwaning II Mine, but it did/does exist in rare, high-quality pieces such as this. The white is most certainly Charlesite, and there are known specimens of Charlesite from N'Chwaning that are well-formed and yellow. The gemminess and luster of this miniature take it to the next level! Because the members of the Ettringite group of sulfates all have remarkably similar, and complex, formulas, they do tend to intergrow and so the only way to really tell which is which is by analysis. At the time these came out, this particular style was said to be charlesite-dominant, while the more hexagonal crystal style was called sturmanite at the time (this is in the 1990s). I can only speak to the conventions for this particular time and place, and this style. The more irregular crystal shape here, which looks for all the world like a lemon yellow kunzite at first, was alsways labeled as charlesite. However the dominant Charlesite will also have zones within of both Ettringite and Sturmanite. A very interesting, gorgeous, unique kind of crystal from a time and place, that leaps out because of the intense lemon color. (note from Rob: I sold this to Richard Mushlitz back in the late 1990s, and it still has my price label and card from when i lived in a college dormitory with a fake room-mate i bribed to live elsewhere so that I could store minerals in the grad student housing apartments; priced at $450 at the time. Worth more, today, 20 years later with no more such material found. )