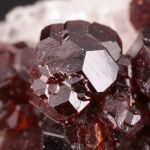 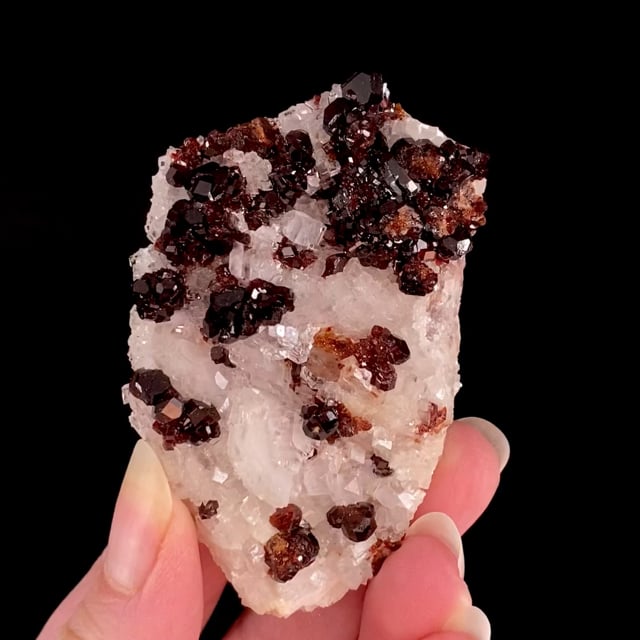 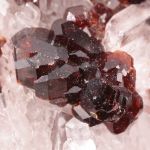 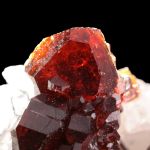 For quite a few years, you would have seen these specimens labeled as Uvite Tourmaline. Now after a redefining of the species, these crystals are now part of the Fluor-uvite - Uvite series. Unfortunately they cannot be distinguished visually, so we have them labeled simply as the series. With that said, it appears that most pieces that were labeled previous as Uvite are likely to be Fluor-uvite, but we are labeling these specimens going forward as Fluor-uvite - Uvite series. This small cabinet sized piece features many tabular, trigonal crystals of a dark red color with high luster and excellent gemminess sitting on colorless to white, very sharp, lustrous gemmy Magnesite crystal matrix. The Fluor-uvite - Uvite crystals measure up to 4 mm, but look beautiful under magnification. Most crystals are in good condition, though there are a few bruises here and there. A good quality example of these world-class "Uvite" crystals. The red crystals from this locality are the more desirable color for this material as opposed to the golden or green crystals in my opinion, and they seem to be less available on the market. Valued at $700-$900. From the collection of Kurt Hefendehl (#75 B), a well-known German collector all over Europe with worldwide contacts to dealers and collectors. He started collecting seriously at the age of 14 and his great and varied worldwide collection reached over 6000 pieces. He was very active mineralogically until shortly before his passing in 2020 at the age of 82. Considering his collection had a large number of pieces, it still had an unusually high standard of quality from most worldwide localities. He particularly specialized in all classics as well as minerals of the Black Forest, where he spent much time collecting. His Black Forest and German subcollections went to his good friend Wolfgang Wendel. We at The Arkenstone have the privilege of offering the remainder of this great worldwide collection over the next two to three years through our various platforms.