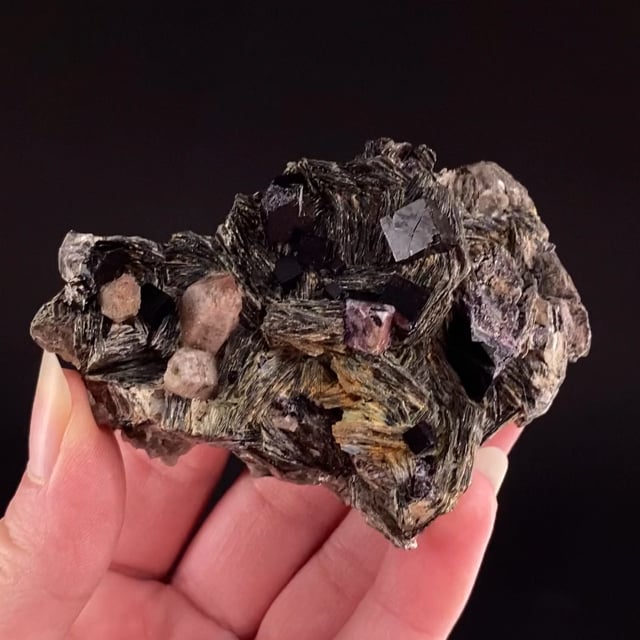 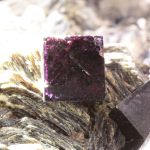 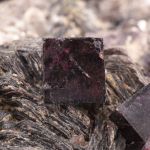 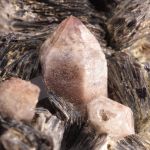 Fluorite with Quartz on Zinnwaldite

An odd Fluorite specimen from the old Zinnwald-Cínovec mining region in the Ore Mountains on the border of Germany and the Czech Republic featuring several sharp, lustrous, well-formed, dark purple (with a slight golden color in spots when backlit) cubic crystals measuring up to 6 mm sitting on bladed Zinnwaldite Mica matrix. There are a few Quartz crystals on the piece with a strange pinkish hue (possibly due to iron oxide inclusions), and even one of the Fluorites has this same coloring. An interesting an unusual piece that would make a great addition to any Fluorite suite or a collection of old European classics. From the collection of Kurt Hefendehl, a well-known German collector all over Europe with worldwide contacts to dealers and collectors. He started collecting seriously at the age of 14 and his great and varied worldwide collection reached over 6000 pieces. He was very active mineralogically until shortly before his passing in 2020 at the age of 82. Considering his collection had a large number of pieces, it still had an unusually high standard of quality from most worldwide localities. He particularly specialized in all classics as well as minerals of the Black Forest, where he spent much time collecting. His Black Forest and German subcollections went to his good friend Wolfgang Wendel. We at The Arkenstone have the privilege of offering the remainder of this great worldwide collection over the next two to three years through our various platforms.