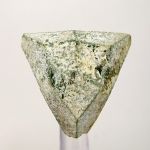 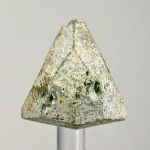 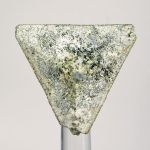 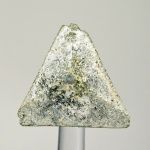 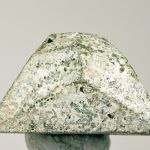 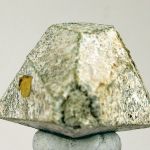 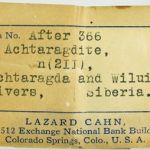 Achtaragdite is a unique, rare and poorly understood pseudomorph from this remote Siberian locality, that is the Type Locality for grossular garnet. It is a variety of the grossular-hibschite garnet series and is (technically, according to internet research) a hydrogrossular-chlorite-carbonate pseudomorph after what was formerly considered to be wadalite or some other rare hydrogarnet. The real precursor mineral for these pseudomorphs is now considered to be helvite. The very lightweight floater crystal (a combination of grossular and intergrown kaolinite) has the very sculptural textbook form of isometric helvite crystals. It looks like a clay crystal model, but it is not. Two terminations are lightly contacted, with no damage and that's a piece of an old paper label on one side. This highly unusual and very rare pseudo is an old-timer, as it comes with a faded Lazard Cahn label dating from 1927-1940. Cahn studied in Germany prior to World War I under Victor Goldschmidt. This amazing pseudo undoubtably dates to the Imperial Russia era.