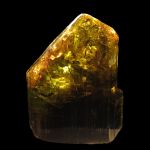 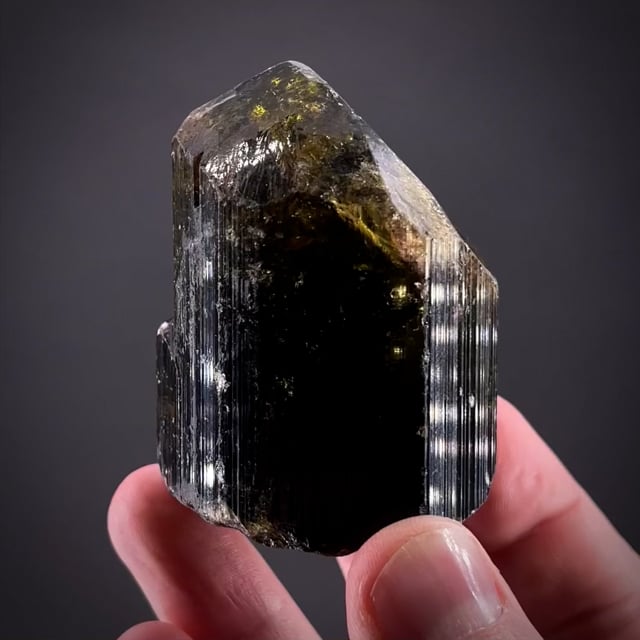 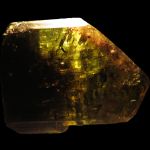 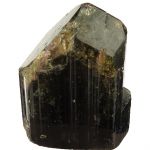 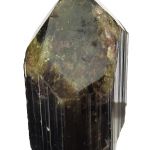 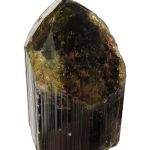 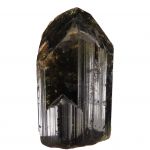 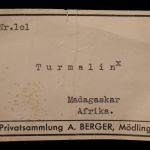 OLD, RARE and impressive bi-colored tourmaline from the famous pegmatites of madagascar, from very old finds nearly 100 years ago. The striking, stout, tabular, skewed, steep modified pyramidal prism is very glassy, highly lustrous with striated sides. Pink and olive-green areas are visible under normal light with the lower portion appearing to be nearly opaque - BUT - backlighting reveals a much larger gemmy olive-green section, the entire upper half, dramatically accented by the vivid pink areas below the termination faces. The interior veils add much character. Complete all-around and nearly pristine, with only one termination edge having a bit of bruising. Madagascar is renowned for large multi-colored tourmalines from several localities (and note this is conjetured to be form Anjana or could also be from Sahatany, we are told - difficult to say now) . See the 1989 Mineralogical Record article in Vol. 20, No. 3. This old rarity undoubtedly dates to the early 1900s to about 1927 active mining period, as the mine was inactive until 1970. It comes with an Anton Berger private collection label. Anton Berger (junior and senior) were prominent Austrian dealers from the 1920s to 1950s. See: https://mineralogicalrecord.com/biographies_labels/bergeranton/. Ex Klaus Neumann Collection, a well-known German tourmaline collector. This is a fascinating and rare old colored tourmaline for Madagascar, quite different from modern specimens. Mass is 199 grams. Valued at $3000-3500 by previous owner