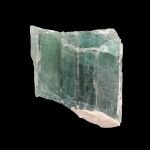 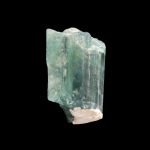 If you search Google for some of the rarest gems in the world, Grandidierite is surely going to show up. It's always featured on various "Top 10 Rarest Gems in The World" lists. It falls into a category of rarity along species like Painite, Phosphophyllite, Taaffeite, Poudretteite, Benitoite, Legrandite and Jeremejevite. For what it's worth, Grandidierite was ranked at #7 on Mining Global's "Top 10 Rarest Gems Found on Earth" list, and it came in at #3 on Forbes' "12 Most Expensive Gemstones In The World" list. The species was discovered by the French mineralogist, Alfred Lacroix in 1902 and named after French explorer and naturalist Alfred Grandidier (1836–1912), who wrote the great natural history book: "L'Histoire physique, naturelle et politique de Madagascar". The species is a magnesium, iron, aluminun borosilicate and although it has been found in multiple localities around the world, it's still considered exceptionally rare, especially in gem quality material. Rarities can often carry a lot of value in their color, as some of the most expensive species have truly unique or distinctive colors. The best Grandidierites have a very captivating greenish-blue hue, similar to the top Euclase specimens from Colombia. It's important to note that for decades, it was virtually impossible to obtain a piece of Grandidierite in any size, and good crystals are almost non-existent. A few years ago there was a new discovery of Grandidierite in Madagascar, and it really made waves in the hobby. This thumbnail specimen is a great example of this new material, as it is not only good sized, but has wonderful color. The crystals is sharp and lustrous with attractive prismatic striations and beautiful internal translucency with that gorgeous greenish-blue color. Minor white Feldspar can be seen on one end. While the crystal is contacted on both ends, it's still a very good sized piece of a remarkably rare and desirable species. If you've always wanted an example of this remarkable material, this is a perfect opportunity to snag a nice piece for a good price. For reference, I have seen FACETED STONES of Grandidierite selling for over $5,000 per carat in the past few years since this new discovery was made. We had this piece priced at $1,500 in the inventory.