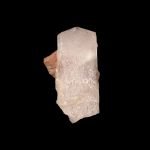 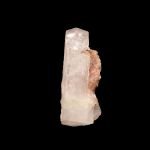 Mount Saint-Hilaire is beloved by collectors for producing a wealth of mineral species, including many "best in the world" examples. There are plenty of rare species found at MSH, but even common species have their own distinctive appearance at this locality. This lovely miniature specimen hosts a sharp, gemmy, thick, prismatic, colorless crystal of Natrolite which is associated with minor pinkish-orange Serandite on the reverse side. Very good quality, and the tip of the termination is certainly gemmy enough to yield a nice faceted stone. This material is not easy to find on the market as we've been told that collecting at MSH is now restricted by the new ownership, so it's not nearly as easy to get specimens as it was in the past. Ex Charlie Key personal collection. Charlie is arguably the most successful dealer of the second half of the 20th century, along with being the namesake for TWO mineral species (Keyite and Ludlockite). Valued at $1,500 in the inventory.