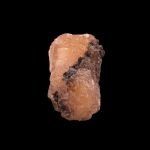 Without the specimens from the N'Chwaning Mines, most people would have no knowledge of the species Olmiite. This species, despite its noteworthy presence on the market for the past several years, is a remarkably rare mineral, only found in four mines in the world! The N'Chwaning specimens are iconic and world class, as collectors have seen exemplary representations of this gorgeous calcium manganese silicate. It's important to note that Olmiite has only been a valid species for just over 10 years, so it has to be one of the most significant discoveries in decades as most new species are often microscopic and not terribly colorful. Keep in mind that virtually all of these specimens were labeled as being Poldervaartite several years ago, which now is an even rarer species. These specimens have a distinctive glowing reddish / orange / peach color that truly does not look like any other mineral. I think of these specimens the same way I do Pentagonite, which is to say that they are both incredibly rare and beautiful species with clearly eye-visible crystals, and finest specimens truly come from one place in the world. This piece features several excellent and showy groups of well-crystallized, gemmy, pinkish-orange Olmiite with minor attached matrix. A lovely thumbnail of this beautiful material.