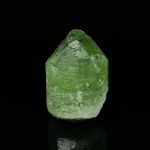 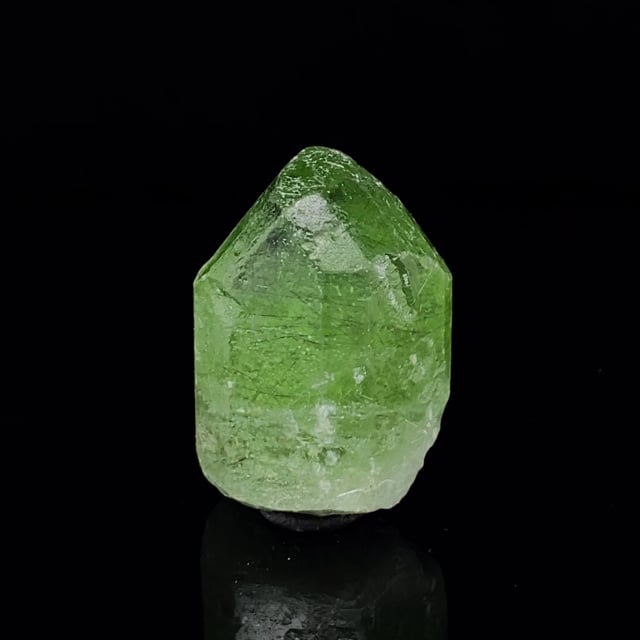 The Peridot crystals from Sapat Gali are some of the largest and finest Peridot crystals in the world. You don't see a lot of gem quality Peridot crystals on the market these days, but these Pakistani pieces have found their way into worldwide collections. This specimen is an excellent quality lime green color crystal with sharp, well-formed faces and excellent internal clarity when backlit. If you look closely, you see very fine, acicular, black silky fibrous inclusions of the relatively rare borate, Ludwigite frozen inside the Peridot. These inclusions are characteristic of many of the Peridot specimens from this locality. The Peridot crystal has a notably sharp well-formed termination for this material. So many specimens from this locality are distorted and often very rounded with poorly defined faces, but not this one. The piece is complete on the front, but there is a separation mark on the back where it was detached from the pocket wall. Keep in mind that this locality has produced the finest quality Peridot crystals in the modern era of mineral collecting. With the exception of St. Johns Island in Egypt (which typically did not produce specimens that are larger than thumbnails and the majority of them were found at the turn of the 20th Century), there are only a few world-wide localities that produce gem quality Peridot of any substance, and the majority of that material is not even crystallized ! I have to stress that this species is exceptionally rare in well crystallized specimens such as this one, and the rare Ludwigite inclusions make it that much more impressive. From the collection of William ("Bill") (1927-2006) and Anne (1928-2021) Cook of Cleveland, Ohio. This husband and wife duo were actively involved in the mineral world for many decades. Bill was a PhD geologist, and Anne was a mathematician, and they both were very serious mineral collectors. Bill served for many years as adjunct curator of mineralogy at the Cleveland Museum of Natural History, and Anne was inducted into the Micromounters' Hall of Fame on October 12, 2019. Both Bill and Anne, at various times, served as president both of the Mineralogical Society of Cleveland and of the Micromineral Society of the Cleveland Museum of Natural History, and Anne was inducted into the mi The rare barium lithium beryllium phosphate Wilancookite was named in their honor in 2015.