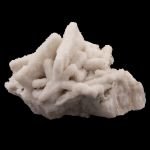 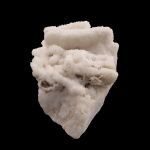 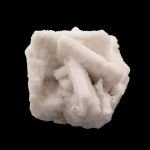 Here we have a showy cabinet display specimen featuring well-defined "casts" (perimorph / epimorph) of "sugary" Quartz replacing Anhydrite on massive Quartz matrix. The largest "cast" measures 4.7 cm long. No real damage that I can see with the naked eye, except around the periphery where the piece was removed from the pocket wall. A few of the "casts" are actually open / exposed so you can see they are genuinely hollow inside. This piece is very aesthetic and displays wonderfully as you can see from the photos. A wonderful example of these very hard to find replacements from San Juan County. Valued at $650. It should be noted that for years people have written that these epimorphs / "casts" were replacements of Quartz after Barite. People in the know (Brian Kosnar and Virgil Lueth come to mind) always contested that this couldn’t be the case, and that they were most likely after Anhydrite, as anything caustic enough to dissolve Barite would almost certainly wipe out any other minerals it came in contact with in the pocket. From the collection of Gary Weaver (1944-2019), an electrical engineer who worked for Hughes Aircraft in California. After retiring to Prescott, Arizona in the early 2000s, Gary rekindled his childhood love of minerals, amassing a collection of roughly 2000 specimens, focusing on localities in which he and his wife had lived or visited (Mexico, Peru and the western / southwestern United States). You can read Gary's obituary here https://www.dcourier.com/news/2019/apr/27/obituary-gary-richard-weaver/