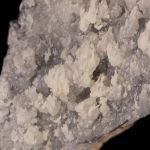 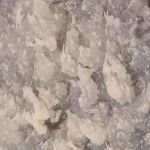 This Chalcedony specimen was collected in August of 2018 by a good friend of ours in Greece who discovered the deposit while on a trip to the small island of Lesvos (Lesbos). I purchased every piece he found as they are some of the most unique and unusual pieces of Chalcedony that I've seen. When I first saw them, I immediately thought of a handful of pieces that I had seen years ago from Cornwall, England which are fairly similar to this specimen, but these Greek pieces still have a look all their own. The appearance makes one think of a windswept beach or rolling white-capped waves on the ocean with their gentle flowing forms that almost give the appearance of movement. I think it's safe to say there are two generations of Chalcedony present with a soft blue botryoidal layer underneath and a lighter nearly white colored generation on top. It's really a special piece for its unique form and lovely color combination. There is a lot of Quartz in the world, but one just does not encounter pieces like this very often, and outside of a handful of specimens from Cornwall, I've never seen anything quite like it. A must have for anybody who collects worldwide Quartz and its many varieties.