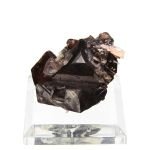 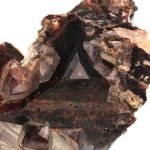 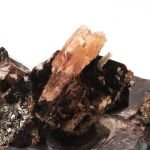 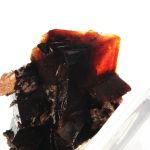 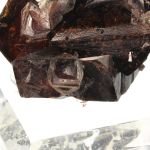 The famous Poudrette Quarry at Mount Saint-Hilaire is one of the world's most significant mineral localities. It has been the source of many "best in the world" examples of many mineral species for decades. Sadly, due to new ownership, collecting is very limited, and it is going to be quite difficult to get your hands on any new material from this world-renowned quarry. One of the most distinctive minerals from MSH is the unique Rhodochrosite specimens with their distinctive habit and color. This attractive miniature sized piece features a very sharp, lustrous, well-formed, triangular (trigonal), deep orange-red colored crystals of Rhodochrosite measuring up to 2.6 cm across intergrown with additional Rhodos of similar quality associated with no matrix. A bit of GEMMY salmon colored Serandite along with minor white bladed Albite and prismatic black Aegirine make for a nice touch. The piece was difficult to photograph and truly looks better in person. There is a spot along the left side of the main crystal which is actually a negative space left behind from where a previous crystal once grew. It's not damage, but almost an "impression" left behind from the original crystal. Yes there are a few "rubs" here and there, but one rarely sees Rhodo crystals of this size and quality from MSH, and you would be hard pressed getting your hands on a piece like this today for the low starting bid of $999. If you collect worldwide Rhodos or minerals from Canada or specifically from Mont Saint-Hilaire, dot NOT miss out on this one. From the worldwide Rhodochrosite collection of Dr. William S. Logan (Specimen #X35-5). Valued at $6,000 in our inventory.