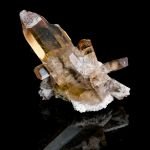 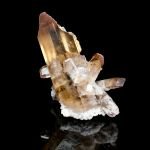 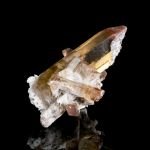 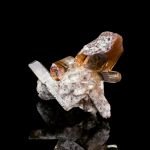 Click here to see a video of this specimen!
Topaz crystals from La Ventilla are considered some of the best Topaz crystals in all of Mexico. An old classic, rarely seen today! This cluster of gemmy topaz crystals features a large, primary crystal measuring 5.3cm with smaller crystals arranged around it. The termination of the primary crystals appears to have been attached to the side of the pocket as matrix is still present from where it was extracted; this is natural growth, not damage! The coloring varies from a strong cognac brown to a gentler, mellower hue. This is from the collection of legendary California collector John Patrick, who was one of the first colelctors to preach the idea of quality and lack of damage, over collecting representative examples. He once wrote one of the first public articles on connosseurship in collecting, and started and influenced many other early California collectors in the mid 1900's. Don Boydston was a notable collector of the 1950s-1970s, as well, and owned this until his estate was sold by the family in the early 2000s. If yousee one of these on the market, of this size, it could be tempting to think it a Utah topaz (and worth thousands of dollars, more, if mislabelled thus), but this is indeed a rare Mexican historic piece. Rarely for sale, and certainly wort $500-plus.