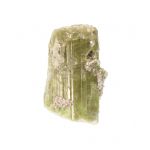 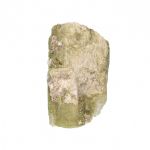 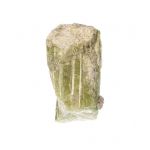 Tourmaline (inside out pseudomorph / replacement) with Quartz and Lepidolite

Tourmaline is not a mineral that most people associate with pseudomorphing / replacement, but the Tourmalines from the Urubu Mine are some of the most distinctive and interesting examples out there. This piece is actually a really interesting replacement specimen as it started out as a solid crystal of green Tourmaline, but now a large percentage of the crystal has been replaced by white translucent Quartz. The truly interesting aspect to me is that the replacement took place from the CENTER of the crystal and worked its way to the exterior, which is not typical for this phenomenon in mineral species, as they are often replaced from the exterior first and the interior will remain as the original species. I love the fact that the original green Tourmaline is still present, as you can see that the internal Quartz is striated exactly the same way as a Tourmaline crystal, so this isn't Tourmaline coating Quartz, it's genuinely Quartz replacing Tourmaline from the inside out! Small groups of lilac "Lepidolite" Mica can be seen on the side of the piece for a nice touch. If you collect gem crystals, pseudomorphs / replacements, unique specimen or just Brazilian specimens in general, don't miss out on this really interesting and rare example for your collection.