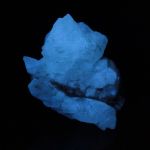 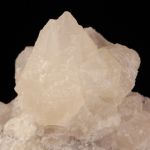 Witherite is a well-known barium carbonate, that is only found in a few world localities in fine quality crystals. The species was discovered over 200 years ago, and the type locality at Brownley Hill Mine, England along with other mines in Cumbria have produced some of the most distinctive and classic specimens around. Along with the English pieces, the specimens from the Minerva #1 Mine in Illinois are among the best ever found. This particular specimen features large, sharp, well-formed, lustrous, pseudo-hexagonal (orthorhombic), light yellow color (nearly white), translucent crystals of Witherite measuring up to 3.7 cm with minor associated blue and purple Fluorite on the back. The piece is in good condition all the way around, save where it detached from the pocket. Very little damage, though I can see a few contacts here and there. The size, quality and relative obscurity on the market today make this a worthwhile specimen from one of the most famous mining districts in the United States. We had a value of $4,500 on this one. From the worldwide mineral collection of Albert Lewis Kidwell (January 1, 1919 - August 16, 2008). Al was a well-known mineral collector and research geologist with Carter Oil Company and later Exxon Oil Company in Houston, Texas. The phosphate species Kidwellite was named in his honor in 1974.