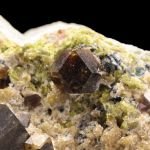 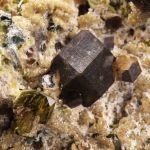 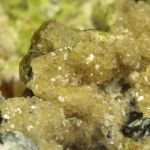 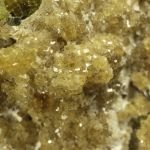 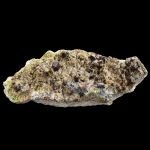 Andradite Garnet with Epidote and Clinochlore

For some time, we were told that these Andradites were coming out of Pakistan, but several individuals have confirmed that they are indeed from the Nangarhar Province in Afghanistan. Despite the fact that this province is incredibly well-known for its pegmatite minerals (Tourmaline, Spodumene, etc.), these specimens are actually from a metamorphic skarn deposit. These are some of the recognizable Garnets around, and the beautiful contrasting colors of the various associated species make for some eye-catching specimens. This large cabinet display specimen hosts a many sharp, lustrous, dark reddish-brown, well-formed dodecahedra of Andradite which are associated with small gemmy, lustrous green colored crystals of Epidote plus blue-grey foliated groups of Clinochlore on matrix. The largest Andradite measures 7 mm across. If you look closely, you'll see tiny sparkling crystals of a soft golden-beige hue, and under magnification you can see they are dodecahedral in habit, meaning there is a second generation of Andradite on the piece. I honestly don't know if I can remember seeing two generations of Garnet on the same specimen from this locality, but I have to believe this particular specimen isn't the only one. An attractive big association specimen from this interesting occurrence in Afghanistan. Valued in the inventory at $950.