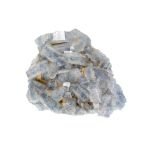 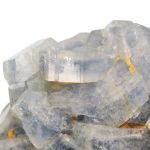 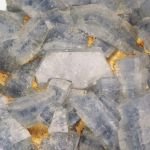 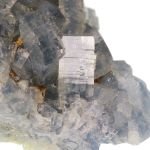 These rare Beryl specimens are incredibly hard to find from Erongo on the market these days. They came out several years ago, and very few were found. They are eerily reminiscent of the similar Beryl crystals found in Afghanistan circa 2011-2012 (which were said the be cesium-rich and were labeled as "Vorobyevite" for a time). With that said this piece hosts many fine quality, sharp, lustrous, translucent, unusually tabular Beryl crystals measuring up to 1.5 cm across free of matrix. As you can see, the centers of the crystals exhibit a deep blue color, almost too dark to be called Aquamarine (they are BLUE Beryl!) which have a defined color zoned / bi-colored appearance with a softer almost colorless hue on the exterior faces. Interestingly, the reverse side of the specimen shows a small group of COMPLETELY colorless (Goshenite) crystals that show none of the color zoning whatsoever. Overall, the piece is in very good condition, though there are a few nicks, and it's contacted around the periphery where it was detached from the pocket wall. These are RARE, not only in habit and coloring, but simply due to the fact that not many of them exist. If you collect Beryls, gem crystals or minerals of Namibia, don't miss out on this attractive and rare specimens from Erongo. Priced at $1,450. From the Collection of Shields Flynn.