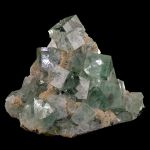 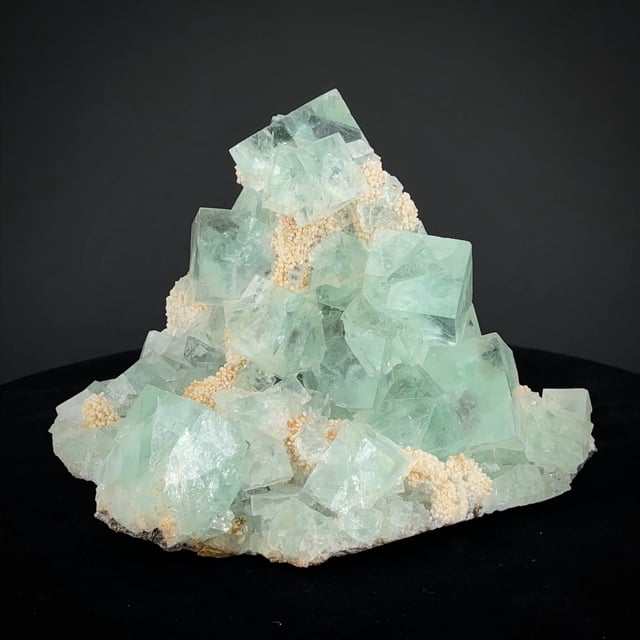 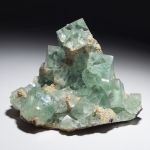 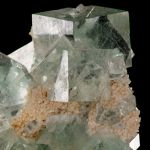 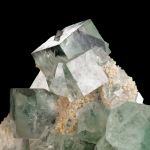 At the time Fran was building his collection most strongly, in the late 1990s into the early 2000s, China was producing new variety of fluorite every year, it seemed. This, from the early 2000s, was one of those styles and is still recognizable today as distinct from modern material from the same mines, which continue to produce. This specimen is a rising "tower" of matrix featuring gorgeous ice-cube like pastel green fluorites hanging off into space. It is really dramatic, 3-dimensional, and aesthetic! It is also in miraculous natural condition, with none of the usual chatter, dings, and damage that so often came out at the time on big fluorite specimens. My guess is that it came out big as part of a pocket, and was trimmed out later. These crystals are GEM TRANSPARENT and while most are 2.5 to 3 cm on edge, the large one in the middle is 4 cm on edge. This piece is as close to pristine as you can get, with perhaps only a few tiny tiny small bits of wear if you really try to find them. It is a complete, 360-degree, fabulous quality display specimen from an early era of Chinese mineral production, that has a sharpness and dimensional quality to it that make it stand out dramatically from the crowd. The cubic fluorites are razor sharp, glassy, gemmy, and have a color that is not too light nor too dark, and just uniquely "Xianghualing" to my eye. The piece is big, nearly 2 kilos in mass, and among the best of this style I have seen in many, many years. It is of a fineness suitable for any collector and we value it highly. Similar material, not as good, has sold for five figures easily in the past.