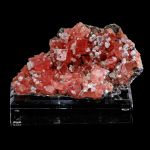 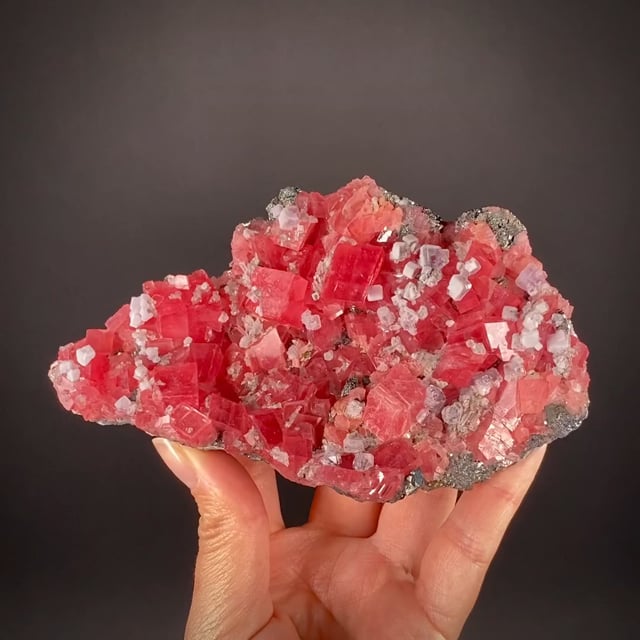 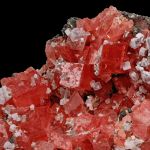 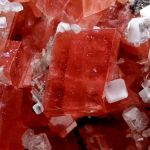 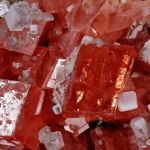 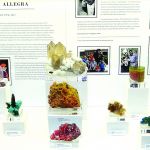 Rhodochrosite with Fluorite altering to Quartz

This gorgeous, uniquely styled rhodochrosite has both the cherry-red color you want in a good rhodochrosite from the heyday of the mid 1990s, AND something special going for it in the accenting fluorite association. The piece has crystals, some of which are especially gemmy, to a whopping 2.4 cm across; although most are admittedly smaller. They are SHARP, and they have great color. But they also have good luster, and finding specimens today that have all three of those qualities is getting difficult. The specimen displays as a long horizontal piece with immediate impact, and features small, cutely rounded fluorite crystals (they fluoresce, as well). Why are some of them white, you ask? It turns out that in some very few pockets of the mine, there was a unique mineralogy, where the fluorite has partially altered to Quartz. This was found in only a few pockets, and is particularly known from this pocket in the famous Hedgehog Raise area of the mine dating from 1997 or so (the color and the association are a dead ringer for what they named Rodney's Pocket in the book - Mineralogical Record, 1998). Fran Allegra was normally the kind of collector who went to a show and bought one rock after 3 days of looking and thinking, but he also sometimes went and bought his mineral in the first 15 minutes, and then spent the rest of the show socializing and looking for fun. He liked to look at everything but in the end, at many shows, it came down to buying a rock from his long held want list or something new and surprising that struck his eye. He arrived, went straight to see the new finds of rhodochrosite (the late 1990s was an unbelievable time when we all thought they'd keep coming out forever, and prices were startlingly reasonable compared to now, even though we did not know it at the time). Fran liked large sizes, and most large rhodochrosites were priced simply unaffordably, even at the time. But this one stood out, and the deal was made as his "show rock" for the entire year (he was disciplined!). For many years this remained the most valued mineral in the collection, and it has consistently been valued by friends who've seen the collection in the $50,000 range when on display in Fran's office across from the White House in DC, ten or more years ago. It may not show in the video, as well as in person - these actually look best in room light or fluorescent lights, but it is a really impactful specimen. Moreover, you have to keep in mind that this is natural - no repairs or restorations or "helping the luster" as can be done with carbonate minerals sometimes. It dates from the days before so much lab work was done to spruce them up and something good had to be good on its own merits. In today's pricing, you cannot get anything of this size and quality, not with the condition and quality of color saturation if you know what you are looking at, for under $75,000. Rhodochrosites from Colorado that look like this but yet without the impeccably pristine condition and the fluorite association, from current production going in at the back end of the same mountain, are often sticker-priced into the six figures and publicly on display at shows the last few years. This is something unique in style, and an oldtimer from a past era of the deposit that will remain a classic. I would rather have a unique oldtimer than a less special example from a new find, the same as everybody else has.