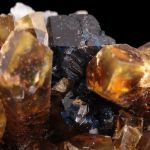 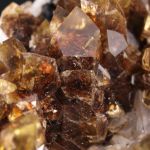 Here we have a wonderful association specimen from the famous Rapid Creek locality in Canada. The area around Rapid Creek is only accessible for collecting during a few months in the summer (it's under snow and ice the rest of the year), and is some of the most treacherous terrain in the world for collecting specimens. This is a great display piece featuring EXCELLENT quality, sharp, lustrous, gemmy, rich golden-brown colored, elongated rhombic crystals of Siderite measuring up to 8 mm associated with a well-formed, monoclinic, deep inky blue color crystal of Lazulite measuring 3 mm associated with minor Quartz crystals on matrix. Lazulite is a rare magnesium aluminum phosphate, and some of the finest, highly sought after, and best known specimens of this material come from this locality, but the focus of this piece is the superb Siderite crystals. From the collection of William ("Bill") (1927-2006) and Anne (1928-2021) Cook of Cleveland, Ohio. This husband and wife duo were actively involved in the mineral world for many decades. Bill was a PhD geologist, and Anne was a mathematician, and they both were very serious mineral collectors. Bill served for many years as adjunct curator of mineralogy at the Cleveland Museum of Natural History, and Anne was inducted into the Micromounters' Hall of Fame on October 12, 2019. Both Bill and Anne, at various times, served as president both of the Mineralogical Society of Cleveland and of the Micromineral Society of the Cleveland Museum of Natural History,