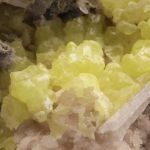 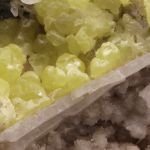 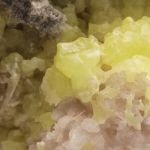 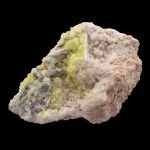 Most people don't think about Sulfur specimens when it comes to Greek minerals, though I have seen a handful beautiful micro crystals from Lavrion. I think the best examples of Sulfur from anywhere in Greece are the specimens from the handful of localities on the Island of Milos, which is where this piece is from. This specimen comes to us directly from a good friend in Greece who personally collected it in 2014. It features bright lemon yellow color, sharp, lustrous, translucent crystals measuring up to 6 mm sitting on volcanic tuff matrix. The majority of the crystals are pristine and look beautiful up close. There are some white bladed crystals on the specimen that I believe could be Barite, which is enforced by the fact that the specimen has a bit of heft to it. You never see Greek Sulfur specimens on the market, so this is a rare novelty piece that make a great addition to any collection. Valued at $450. For reference, the species should now be spelled S-U-L-F-U-R as both the International Union of Pure and Applied Chemistry along with the British Royal Society of Chemistry adopted this spelling in the 1990s (see https://en.wikipedia.org/wiki/Sulfur#Spelling_and_etymology)