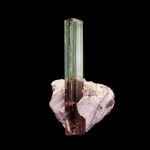 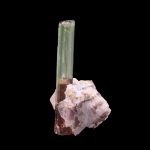 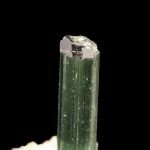 A fantastic GEM quality, "pencil" of bi-colored green and rich reddish-pink Tourmaline associated with a cluster of purple "Lepidolite" Mica at the base from an undisclosed locality in Brazil. The top termination (on the green end) has a few sharp, lustrous, pyramidal faces, and while it may look contacted, I viewed it under high magnification, and I can see that there is a actually a negative crystallized depression, where the crystal is almost beginning to form a slightly skeletal growth, but I feel confident that it is not actually damaged. The other end of the crystal also appears to be contacted at first glance, but upon close inspection, I can see that there are tiny trigonal growth lines, where it certainly appears that the crystal healed ("re-healed") itself after it was detached from the pocket during growth. The "Lepidolite" group is fairly crude and contacted, but it does show a pleasing purple color when backlit. PLEASE NOTE: I put "Lepidolite" in quotes because it is no longer a species, and this material is currently defined as a series between Polylithionite and Trilithionite. A beautiful miniature specimen from Brazil, which has produced some of the most iconic Tourmaline specimens in the world. From the collection of Rolando Gioia (a contributor to new definitive book on Brazilian minerals: "Minerais e Pedras Preciosas do Brasil").